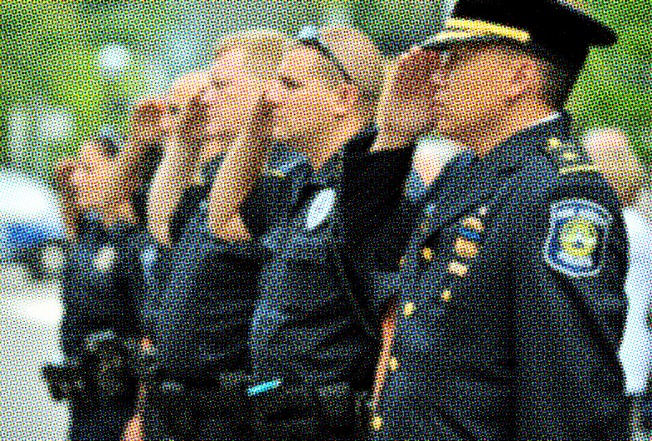 Last summer I went on a ride-along with a very nice Ann Arbor police officer whose name I’ve forgotten because I’m extremely self-centered, but let’s say I’m omitting it to protect his privacy. Let’s call him Officer Jones. I went on a Thursday night from 11:00pm to approximately 3:00am because the Police Chief told me that’s when I was most likely to see some “action.” Here’s what Officer Jones and I got up to.

The Part with the Gun Locker

The first thing you do* when you go on a ride-along is check out the processing area, where arrested suspects are fingerprinted or iris-scanned and locked up in a temporary detention area, and where officers do their paperwork and prepare to go out on their shift . Scariest part: the full-body restraint chair that looks alarmingly similar to an electric chair. Coolest part: the officers’ gun locker.

When we get in the cruiser Officer Jones checks in with the dispatcher and let’s her know there is a “white female, black pants, tan coat” in the car with him. So impersonal. I get to sit in the front, unlike other people I know who have had to sit in the back seat like a criminal when they went on ride-alongs. This makes me feel special again after just being identified as a caucasian wearer of clothing.

Officer Jones is very nice; a total Dad. We cruise around campus for a while. This is while  that U of M student who didn’t show up for graduation and then went missing is still M.I.A. We stalk his house on campus a bit, and look for his car. Officer Jones tells me they know he’s in the area because people have spotted his car and he’s been using his Mom’s credit card around town. To disappear and scare your Mom to death, then spend her money seems rude to me.

Officer Jones: “She’s not mad at all, she’s just scared and wants her son home safe.”

Me: “I bet it’s really annoying that everyone drives really slow around you when you’re in the police car.”

Officer Jones: “We’re not in any hurry, we just want everyone to drive safe. We see too many car crashes.”

Thanks, Officer After School Special. Everything he says is so appropriate I start to feel like I’m a kid on a field trip, or like he thinks I’m going to write about this adventure in excruciating detail and publish it on the internet. Don’t worry, Officer, there’s no way I’ll remember your name!

The Part Where We’re on a Date

We head back into downtown Ann Arbor and drive around with the windows down. Officer Jones is REALLY judge-y about people who go to Necto. I ask him if the police are called there a lot and he tells me, rather mysteriously, that Necto usually “takes care of their own problems.” This sounds like the beginning of an episode of Smallville.

At a stoplight a young woman points at us in the car and loudly asks the guy with her “Does he have a DATE with him?” Awkwardness ensues. I decide to admit to Officer Jones that I wore a trench coat for this little adventure because I wanted people to think I was a detective. This will become important later.

The Part Where He Calls His Wife A Lot

Like every 15 minutes. Like he’s questioning my intentions now after a moderately drunk passerby thought I looked like his girlfriend. Awkwardness continues as I have no choice but to eavesdrop on multiple conversations with his life partner. The number of calls seems excessive, but I can understand why constant check-ins would be reassuring to the spouse of a police officer.

Snack break at a convenience store

The Part with the Action Sequence

We get a call on a robbery at a medical research facility in an office park on the north side and we get to race to the scene full speed with the lights on and siren wailing. I try to look less excited than I am. Serious face.

We slow down and switch off the lights when we get close, so as not to scare off the perp (cop talk!) if they’re still around. The front glass doors are shattered.

I have to stay in the car, of course. Another cop car shows up and parks in front of us. He also has a ride-along with him, who turns out to be a dweeby high school boy. Both officers head inside with guns drawn while dweeby high school boy (DHSB) and I play on our phones in the cars. I keep expecting the burglar to jump out of a nearby window, giving DHSB and I a chance to leap into action and detain him. This doesn’t happen.

Eventually a lot more cars show up, along with police dog, crime scene photographer et. al. After a while DHSB and I get to go in the building. We step carefully over lots of broken glass  and follow Officer Jones back to an on-site pharmacy where lots of prescription meds were stolen. We can’t go all the way in because the photographer isn’t done, but we get to snoop around a bit.

A bit later we get another call to take a police report at the U of M hospital emergency room. On our way we pass the Survival Flight helicopter taking off and Officer Jones stops the car so I can watch. I feel like he’s trying to entertain me as you would a small child. (“Look! Look at the helicopter go! What noise does a helicopter make?”) His Dad-ness is really shining here.

Anyway, we end up taking a statement from a middle-aged woman and her middle-aged boyfriend, who are not the classiest couple I’ve ever met, but seem nice. Some family member apparently said something to her nephew about an old boyfriend beating her, which said nephew took to mean her current boyfriend was beating her, so nephew came over to beat the boyfriend. Boyfriends’ eye is a mess and they want to file a police report, so Officer Jones interviews them about the incident in depth. There’s a lot of confusion and a lot of crying.

As we’re wrapping up, Officer Jones turns to me and asks “Do you have any additional questions?”

Having just watched two people with obviously upsetting family and social issues hold each other and cry, it’s hard for me to summon a good detective impersonation on command.

Me: “No, I think we have all the information we need.”

Three steps out the hospital room door Office Jones is heckling me, all “That’s all you’ve got, Detective?” like I was a monster earlier in the evening because I couldn’t comprehend maternal love or the importance of road safety, but now he’s disappointed I can’t just have a little fun with domestic violence.

The Part Where We Get Bored

We drive around some more, and watch another officer administer multiple sobriety tests  to and ultimately arrest a drunk driver. Having shed his “I just love the law” schtick, Officer Jones informs me that when given the option to perform a sobriety test or be taken in for a blood test, you should never opt for the latter, because you can usually perform pretty well on a sobriety test even if you’ve been drinking, but a blood test is never wrong. #ProTip.

With no more drunk people or helicopters to look at, Officer Jones takes me back to my car.

*Actually, the first thing you do is circle the building multiple times looking for an unlocked door because the police department is pretty locked down at 11PM and you end up having to ask a police officer which door you’re supposed to enter and then call the office to get buzzed in and then you get lost a few times before you find the right office and then you have to sign in and get a background check and stress about whether you have any unpaid parking tickets you forgot about because you’re surrounded by cops and sitting ten feet from a cell.

3 thoughts on “Dumb Things I Said to a Police Officer”